ibm, google & the rebirth of the barcode

from telegraph: Users of the internet search engine are being greeted with a bar code in place of the usual Google logo, exactly 57 years after United States inventors Norman Woodland and Bernard Silver were granted a patent. It follows recent Google doodles in honour of the ancient Chinese philosopher Confucius and Mahatma Gandhi, the father of modern India.

Woodland and Silver, who met while students at the Drexel Institute of Technology in Philadelphia, originally devised a system that would encode data in concentric circles. The lines of varying width were developed later, partly inspired by Morse code. According to a Washington Post report, the doodle bar code appears to have been created by encrypting the word ‘Google’ using Code 128, a standard symbology.

The original patent was filed by Woodland and Silver in 1949 and granted on 7 October 1952. However, bar codes were not used commercially until retailers in the National Association of Food Chains (NAFC) agreed on the familiar Universal Product Code designs that are still seen on billions of worldwide items today. The first supermarket scanner that could read UPC bar codes was installed at March’s supermarket in Troy, Ohio, in June 1974. The first product to bear the bar code was a packet of Wrigley’s chewing gum. 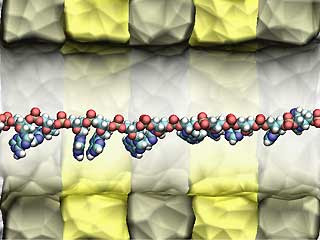 from foxnews: Imagine a world where medicine is guaranteed not to cause adverse reactions because it's designed for an individual's DNA. Imagine a diet tailored to the precise speed of a person's metabolism. Using a little microelectronics, a little physics, and no small dose of biology, IBM has brought that futuristic world a little bit closer.

The DNA Transistor is a project from IBM Research that aims to advance personalized medicine, by making it simpler (and much cheaper) to read an individual's unique DNA sequence — the special combination of proteins that makes you unlike anyone else.

The technology isn't finished yet, but its potential is tantalizing enough that IBM wanted to share it with the world. And the company claims researchers are making progress.

Essentially a bar code reader for genes, the DNA Transistor is part technique and part device. It consists of a 3-nanometer wide hole, known as a nanopore, in a silicon microchip. A sensor in the pore can read DNA and determine its unique makeup...

“The technologies that make reading DNA fast, cheap and widely available have the potential to revolutionize bio-medical research and herald an era of personalized medicine,” said IBM research scientist Gustavo Stolovitzky. “Ultimately, it could improve the quality of medical care by identifying patients who will gain the greatest benefit from a particular medicine and those who are most at risk of adverse reaction.”

and if you're not completely unsettled yet,
just read about ibm & the holocaust...