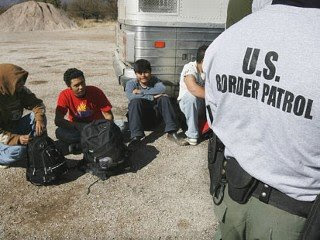 from washington times: With only eight takers since the program's creation this month, U.S. Immigration and Customs Enforcement (ICE) has decided to scrap its self-deportation program for illegal immigrants who previously had ignored court orders to leave the country. The pilot program, which began Aug. 5 in five cities, officially ended Friday. It had been offered to the more than 457,000 illegal immigrants nationwide who ignored judicial orders to leave the country. Known as “Scheduled Departure,” the plan gave illegal immigrants facing deportation a total of 90 days to turn themselves into ICE, allowing them to plan their departure date and to coordinate their travel plans with relatives instead of facing the prospect of being arrested, detained and deported.

illegal immigrants returning to mexico in record numbers
from fox news: Illegal immigrants are returning home to Mexico in numbers not seen for decades — and the Mexican government may have to deal with a crush on its social services and lower wages once the immigrants arrive. The Mexican Consulate's office in Dallas is seeing increasing numbers of Mexican nationals requesting paperwork to go home for good, especially parents who want to know what documentation they'll need to enroll their children in Mexican schools.

"Those numbers have increased percentage-wise tremendously," said Enrique Hubbard, the Mexican consul general in Dallas. "In fact, it's almost 100 percent more this year than it was the previous two years."

The illegal immigrant population in the U.S. has dropped 11 percent since August of last year, according to the Center for Immigration Studies. Its research shows 1.3 million illegal immigrants have returned to their home countries.

Some say illegal immigrants are leaving because a soft economy has led to fewer jobs, causing many laborers to seek work elsewhere. Others argue that a tough stance on immigration through law enforcement has spread fear throughout the illegal population.

from times online: Rich Mexicans, terrified of soaring kidnapping rates, are having tiny radio transmitters planted under their skin so they can be quickly tracked and rescued. Hundreds of people, including a growing number of middle-class Mexicans, are buying the tiny chip designed by Xega, a Mexican security firm. Kidnapping jumped almost 40 per cent between 2004 and 2007 in Mexico, which has surpassed conflict zones like Iraq and Colombia to register the highest kidnapping rates in the world, according to a recent study.

from austin american-statesman: U.S. Immigration and Customs Enforcement updated the tally of people arrested at a large immigration raid in Laurel, Miss. The raid, at an electric transformer manufacturing facility, netted 595 illegal immigrants, ICE said Tuesday. Of those, 106 were offered “an alternative to detention based on humanitarian reasons.” According to various press reports, most of the 106 were parents of small children and were given ankle bracelets and told to appear in court at a later date.