from what really happened: Contrary to the image of a dangerous gun nut put out in the media in an effort to justify the burning of the church, official BATF records prove that David Koresch was rather harmless, so much so that the BATF agents invited him to go shooting with them just 9 days before they raided the church. Koresch supplied the ammunition. The BATF agents allowed Koresch to try out their weapons.

from what really happened: There are many problems with the official story of the bombing. Let's start with McVeigh's whereabouts on April 17. McVeigh had been filmed by a security camera at a nearby McDonald's 24 minutes before the time stamped on the truck rental agreement, wearing clothes that did not match either of the men seen at Elliott's... There is also an unanswered question with regard to the truck, namely what was the Army doing with a Ryder Truck just before the Murrah blast? 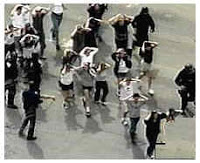 from judicial-inc: The SWAT team finally moved in at around 2:30 PM, 2 hours after the shooters committed suicide. Despite having seen signs in the windows that said victims were bleeding to death 2 hours earlier, this was the fastest they went into action. Parent's lawsuits contend that police may have shot innocent students. According to the sheriff's report, twelve officers fired a total of 141 times at Columbine that day. Three Denver SWAT veterans fired 105 of those rounds.

from legitgov: The sister of the gunman responsible for the deadliest shooting rampage in modern US history works as a contractor for a State Department office that oversees billions of dollars in American aid for Iraq. Sun-kyung is employed by the Iraq Reconstruction Management Office, according to US officials and a State Department staff directory that says she works from an annex near the department's headquarters in Washington.