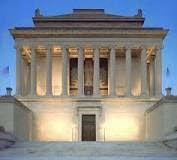 House of the Temple "...is a Masonic temple in Washington, D.C., United States that serves as the headquarters of the Scottish Rite of Freemasonry, Southern Jurisdiction, U.S.A.
(officially, "Home of The Supreme Council, 33°, Ancient & Accepted
Scottish Rite of Freemasonry, Southern Jurisdiction, Washington D.C.,
U.S.A.")," according to Wikipedia.

Jim Shaw, a former 33rd degree Mason, shared his defection from Freemasonry in 1988 book, "The Deadly Deception." Shaw described initiation into 33rd degree on pg 99-109 of his book shared also in article, "A Freemason's 33rd Degree Initiation." A reader suspects price to be paid for initiation not only spiritual but monetary:

"Upon arriving at the Temple I was met by a receptionist who asked if I were there to receive the 33rd Degree. I was surprised to find a women in those sacred Masonic precincts, but said that I was and showed her my letter from the Supreme Council. She then told me that in order to receive the degree, I would be expected to make a 'minimum donation' of a very large amount of money (at least it was a 'very large' amount for me). This took me completely by surprise for there had not been a word about any such 'minimum donation' in the letter sent me by the Supreme Council. I didn't carry that much money with me and had left my checkbook at home but was able to borrow the money from one of the other men and gave it to her. We candidates were all unhappy about this unpleasant surprise and grumbled to one another about it, but were not unhappy enough to forsake the degree over it. We were too close to the 'top of the mountain' to turn back at that point."

It's been noted elsewhere researcher and author Fritz Springmeier found:  "'Billy Graham took part in the initiation rites of Jim Shaw as a 33rd degree Mason. This was before Shaw left the Masons in obedience to Christ.'"   Shaw experienced an epiphany during his initiation that solidified decision to part with Freemasonry.   A  communion ceremony performed on the Thursday prior to Easter, seemed portentous, filled with meaning for Shaw like never before:

"There was something very tomb-like about the setting. The silence was broken only by the organ, playing mournfully in the background, and there was no light except for the little that came through the windows. After the opening prayer (from which the name of Jesus Christ was conspicuously excluded), I stood and opened the service.

As I had done so many times before, I said, 'We meet this day to commemorate the death of our 'Most Wise and Perfect Master," not as inspired or divine, for this is not for us to decide, but as at least the greatest of the apostles of mankind.'

As I spoke these words that I had spoken so many times before, I had a strange and powerful experience. It was as if I were standing apart, listening to myself as I spoke, and the words echoed deep within me, shouting their significance. They were the same words I had spoken so many times before, but had meaning for me now. They made me sick, literally ill, and I stopped.

The realization of what I had just said grew within me like the rising of a crescendo. I had just called Jesus an 'apostle of mankind' who was neither inspired nor divine...

After this we took our places at the table shaped like a cross and sat down. The setting was dark, our long, sweeping robes were solid black, our faces nearly concealed in the hoods, and the mood was one of heavy gloom. The Christ-less prayers and the hymns we sang fit right in. The one word that would describe the entire event would be 'black.' It was, indeed, a Black Communion - a strange Black Mass."

Shaw went into the light!   Perhaps, atmosphere described as "tomb-like" by Shaw,  reflected fact Albert Pike, Freemason and Illuminati, remains  buried in a wall at the House of the Temple.  RoadsideAmerica.com observes Commanders Albert Pike and John Cowles are both buried therel: "It took a special act of Congress to allow the Masons to bury them there; Pike was dug up, Cowles wasn't even dead yet. Do you think that that your civic organization could get a special act of Congress to do that?"  Illuminati Sightseers will have to stop in Washington DC to register impression - more tomb than temple?