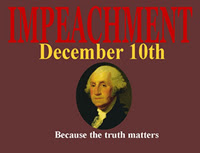 from raw story: This Sunday, Human Rights Day has been renamed "Human Rights and Impeachment Day," as groups hold rallies from coast to coast across the United States calling for President Bush and Vice President Cheney to be impeached.

"The purpose of the events is to organize people to lobby their Congress Members for investigations and impeachment and to lobby their local and state governments for resolutions in support of impeachment," Democrats.com co-founder Bob Fertik writes.

As her final legislative act on Friday, outgoing Georgia Rep. Cynthia McKinney introduced an impeachment bill, although it was just a "symbolic parting shot" by the controversial Democrat and has no chance of passing.

According to After Downing Street, one of the activist groups helping to organize this weekend's events, there "will now also be rallies to honor and thank Cynthia McKinney."

Events scheduled for today include rallies and parades held in such cities as Seattle, Madison, Chicago, Detroit and Tallahassee. At a beach in San Francisco, human bodies will be used to spell out the word "Impeach!"

Also in San Francisco, "under the spot where the UN signed its charter 60 years ago," activists will sing "carols" while clad in orange jump suits, similiar to the ones that detainees at Guantanamo Bay are forced to wear.