in georgia, pecan thieves find windfall, at $1.50 a pound 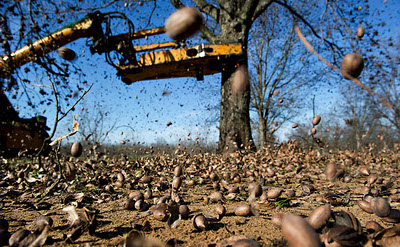 from nytimes: To an enterprising thief, or even a casual dabbler in crime, the fallen pecans that cover thousands of acres of unpatrolled Georgia nut orchards might as well be a carpet of nickels.

Scoop up a pound — 30 nuts or so — and it can be cashed in for as much as $1.50 at the local buying station. A more organized criminal might cut a hole in a fence at a nut-cleaning plant and drive away with a couple of thousand dollars’ worth of top-quality pecans.

Nut theft has long been a reality here in the nation’s pecan belt. It has become such a way of life that a south Georgia rapper, Hawkdogg, even has a song about it: “Crank Dat Pecan.” But this season, which began in October and ends in January, the thefts appear to be at record levels, growers and the police say.

“We’ve had people go in there stealing pecans just like they’re going to a hardware store and taking a hammer and nails,” said Duke Lane, owner of Lane’s Southern Orchards and president of the Georgia Pecan Growers Association.