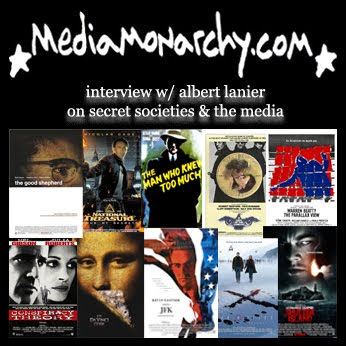 for the latest special interview episode from media monarchy, we're joined again by our friend albert lanier. fresh from the hawaii international film festival, albert is here to let us know that "the secret is out". what secret is that, you ask?

well, for the last several decades, many films & tv shows have (c)overtly covered the topics of conspiracy, secret societies & other malevolent media/memes. if you take a quick look at your local movie marquee, you'll see that conspiracy media is very much a part of the cultural zeitgeist. while it's nearly impossible to completely cover this topic, we do our best to get 'behind the normal' & break down the 'conspiratorial infrastructure'. and that's just the tip of the iceburg.

just some of the films we discuss are: the good shepherd, the man who knew too much, national treasure, 3 days of the condor, the parallax view, conspiracy theory, the da vinci code, jfk, the x-files, shutter island & many many more.

with a subject that's perfect for the media monarchy kingdom, this interview will help 'illuminate' the infotainment that's up next on your netflix queue & coming soon to a theater near you.