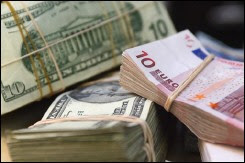 from agence france-presse: The Iranian government said it has ordered the central bank to transform the state's dollar-denominated assets held abroad into euros and use the European currency for foreign transactions.

"The government has ordered the central bank to replace the dollar with the euro to limit the problems of the executive organs in commercial transactions," government spokesman Gholam Hossein Elham told reporters Monday.

"We will also employ this change for Iranian assets (in dollars) held abroad."

The move comes amid mounting pressure from the United States for the UN Security Council to agree sanctions against Iran over its controversial nuclear programme.

Elham added that Iran's budget would in future be calculated according to euros.

"Until now the budget has been calculated according to revenues in dollars but this calculation will now change."