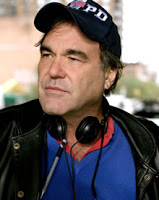 from news24: Iran has rejected a request by United States filmmaker Oliver Stone to make a film about President Mahmoud Ahmadinejad, the website of the news network Press TV reported on Sunday.

Ahmadinejad's media advisor, Mehdi Kalhor, said that Stone had requested to make a film about Ahmadinejad which was however rejected by the president.

"We have already seen his documentaries - even though Stone is considered a member of the opposition group in the US, it is still part of the Great Satan," he said.

Since the 1979 Islamic revolution, Iran has branded the US as the "Great Satan" for what Iran calls imperialistic policies worldwide.

"We believe American cinema is void of real art and culture and largely used as a mouthpiece," he added.

Despite the remarks by Kalhor, Stone is regarded within cinema circles in Islamic Iran as a distinguished filmmaker.

update: oliver stone hits back at iran
from world net daily: Oliver Stone took a swipe at President Bush in a response to Mahmoud Ahmadinejad's rejection of the Oscar-winning director's request to make a documentary film about the Iranian president.

Ahmadinejad's media adviser explained this week that while Stone may be a member of the "opposition" in the U.S., he's "still part of the Great Satan."

"I've been called a lot of things, but never a 'Great Satan,'" the director said in a statement.

"I wish the Iranian people well, and I only hope their experience with an inept, rigid ideologue president goes better than ours."

As WND reported, an Iranian news service said Stone made the request three months ago, and the Iranian president's office had been studying it.