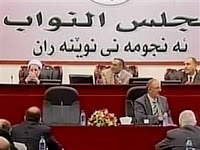 lawmakers in tehran take a diplomatic offensive against washington

“The aggressor U.S. Army and the Central Intelligence Agency are terrorists and also nurture terror,” said a statement by the 215 lawmakers who signed the resolution at an open session of the Iranian parliament. The session was broadcast live on state-run radio.

The hard-line dominated parliament said the two were terrorists, because they were involved in dropping nuclear bombs in Japan in World War II, used depleted uranium munitions in the Balkans, Afghanistan and Iraq, supported the killings of Palestinians by Israel, bombed and killed Iraqi civilians and tortured terror suspects in prisons.