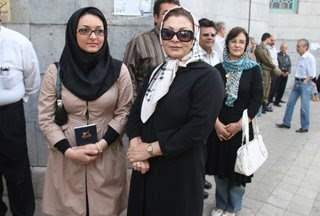 as if everything else wasn't enough, we have these huge stories...

from presstv: The polls have opened in Iran in a presidential election which has generated intense excitement among the electorate as never before. Polls opened at 8:00 am (0330 GMT) and are to close ten hours later. Polling may be extended until midnight if needed to cater for demand, in what is expected to be a record turnout in a closely-contested election. By casting his ballot at about 8:15, the Leader of the Islamic Revolution Ayatollah Seyyed Ali Khamenei became one of the first voters. In a brief speech to the waiting journalists, he commended the passionate yet peaceful nature of the election campaign and called on everyone to use their right to vote, which he also described as both a religious and logical duty. In addition to incumbent President Mahmoud Ahmadinejad who is seeking a second four-year term, Super Friday's vote includes former prime minister Mir-Hossein Mousavi, former parliament speaker Mehdi Karroubi and Secretary of the Expediency Council Mohsen Rezaei. Over 46 million Iranians aged 18 and above, are eligible to vote today in the 10th presidential election since the Islamic Revolution in 1979 deposed the US-backed monarchy. In addition to the 45,713 ballot boxes ready to receive the people's votes throughout the country, the sizeable Iranian expat community is also catered for, with arrangements in place in about 130 countries worldwide. 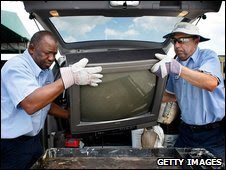 from bbc: More than two million households in the United States will be faced with blank television screens when stations switch off their analogue signal for good. The nationwide transition to digital services has seen a last-minute rush to buy converter boxes and TVs. In total the US authorities have spent $2bn to smooth the transition. But, according to the Federal Communications Commission, there are still 2.2 million households which have made no preparations. US television viewers have been bombarded with a series of adverts over recent weeks, warning them that the analogue signal would be switched off on Friday and urging them to buy set top converter boxes if they didn't want to lose reception.