is john bolton blackmailing those who’d vote him out of UN post? 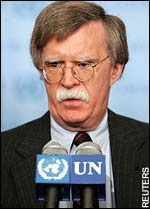 from wayne madsen: One of the signs that there is an intensive clash between the increasingly influential James Baker, Robert Gates, Brent Scowcroft group affiliated with George H. W. Bush and the remaining administration neo-cons centered around Vice President Dick Cheney is the battle to keep John Bolton at the US Mission to the UN.

The neo-cons in the administration are trying to come up with ways to keep Bolton in his position even though the current Republican-led Senate Foreign Relations Committee (with the support of defeated Rhode Island Republican Senator Lincoln Chafee) does not look likely to approve Bolton’s nomination. Incoming chairman Joe Biden said as far as he is concerned the Bolton nomination is dead.

However, neo-cons, including Cheney, are toying with the idea of appointing Bolton to the third ranking position at the UN mission, which does not require Senate confirmation. By not filling the vacant ambassador position, Bolton would serve as an unconfirmed acting ambassador.

It is well known that following Donald Rumsfeld’s ouster at the Pentagon, Bolton is one of Cheney’s sole remaining allies. Bolton is also vehemently anti-Iranian and opposed to the Baker-Hamilton committee’s outreach to Tehran.

Therefore, it is important for Cheney to keep Bolton at the UN to rattler sabers at Iran. Bolton is also supported by the Israeli lobby in Washington that does not want to see any Washington-Tehran talks dedicated to working together on Iraq.

There is also another wild card working in Bolton’s favor. While he was at the State Department, Bolton gathered a number of NSA intercepts on US persons and may be using their content to blackmail members of the administration and Congress to support his continued tenure at the UN.

WMR reported on Bolton’s involvement in the NSA surveillance on May 15, 2005:

According to National Security Agency insiders, outgoing NSA Director General Michael Hayden approved special communications intercepts of phone conversations made by past and present U.S. government officials. The intercepts are at the height of the current controversy surrounding the nomination of Undersecretary of State John R. Bolton as ambassador to the United Nations. It was revealed by Connecticut Senator Christopher Dodd during Bolton’s Senate Foreign Relations Committee nomination hearing that Bolton requested transcripts of 10 NSA intercepts of conversations between named U.S. government officials and foreign persons. Later, it was revealed that U.S. companies [also treated as “U.S. persons” by NSA] were also identified in an additional nine intercepts requested by Bolton. However, NSA insiders report that Hayden approved special intercept operations on behalf of Bolton and had them masked as “training missions” in order to get around internal NSA regulations that normally prohibit such eavesdropping on U.S. citizens.