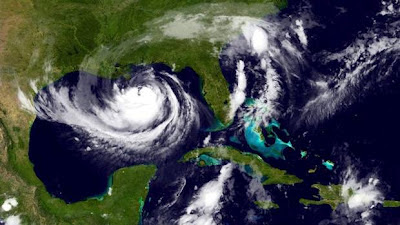 Isaac Threatening RNC2012 and NoLa, Is There Meaning?

from blog.nj.com: Bob Dylan famously said you don’t need a weatherman to tell you which way the wind is blowing. Some Bible-thumpers have put their own spin on that adage. Don’t know why there’s no sun up in the sky? That’s because God is punishing you for your sinful ways. Stormy weather, indeed.

Now Hurricane Isaac – how ironic is that biblical name? – is hitting the Republican National Convention. If the storm was barreling down on the Democratic conclave, we’d have to put up with all kinds of blather about God’s wrath punishing the godless Dems.

Dana Milbank of the Washington Post tallies the recent storm-spinning from the GOP and its allies:

• In 2011, Rep. Rep. Michele Bachmann said that the East Coast earthquake and Hurricane Irene were attempts by God “to get the attention of the politicians."

• Conservative broadcaster Glenn Beck said the Japanese earthquake and tsunami last year were God’s “message being sent” to that country.

• In 2010, Christian broadcaster and former GOP presidential candidate Pat Robertson tied the Haitian earthquake to that country’s “pact to the devil.” Robertson also said in 2005 that Hurricane Katrina was God’s punishment for abortion.

• The late Jerry Falwell thought God allowed the Sept. 11 attacks as retribution for feminists and the ACLU.

So far we haven’t heard anyone from the Obama camp enlist Hurricane Isaac on the side of the Democratic angels: “See, this is what happens when you promote policies that bash the poor, minorities, immigrants, women and homosexuals. Isaac blows you down.”

It could happen. We hope not. One party has to uphold the principles of the Enlightenment and the Age of Reason – neither of which allows for a punishing God that singles out one political party over another.