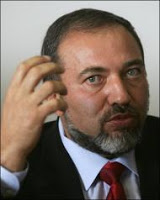 from afp: Egyptian and Saudi nuclear ambitions, on top of Iran’s atomic drive, will lead to an “apocalyptic scenario”, a senior Israeli cabinet minister said in comments published on Friday.

“Their intentions should be taken seriously and the declarations being made now are to prepare the world for when they decide to actually do it,” said the minister, responsible for coordinating Israeli efforts against a nuclear Iran.

from what really happened: Memo to Strategic Affairs Minister Lieberman: Saudi Arabia and Egypt have seen very clearly what happens to countries in the region which do not have a nuclear deterrent.

Iraq never had WMDs: you knew it, the US knew it, and the world knew it.

Yet Iraq was attacked and occupied on the pack of lies that it did.

The leaders of these two countries don’t want that to happen to them, and really, who can blame them?

And by the way, Minister Lieberman: the world knows that Israel has nukes.

Your conviction of Mordechai Vanunu, for having committed the crime of telling the world the truth, has confirmed it.

So before screaming about Egypt and Saudi Arabia, why doesn’t Israel come to the negotiating table honestly, and and become a participant in the IAEA?