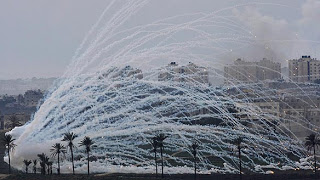 from danger room: The ground war has begun. After eight days of air strikes, Israeli troops are moving into Gaza. The Israel Defense Forces say "infantry, tanks, engineering forces, artillery and intelligence, along with the support of the Israel Air Force, Israel Navy, Israel Security Agency and other security agencies" are all participating in the push. Tens of thousands of reservists are now being called up, as well. "The campaign won't be easy and it won't be short," Defense Minister Ehud Barak says. Already, there's been "a heavy exchange of fire" between Israeli forces and Hamas militants, Ha'Aretz reports. Israeli artillery has started to fall in Gaza. "Leaflets signed by the commander of the Israeli military were dropped over northern Gaza on Saturday morning, warning residents to 'leave the area immediately' to ensure their safety." CNN says. The week-plus-long air war killed nearly 450, and wounded another 2,050. The house-to-house fighting that lies ahead could be much deadlier. And questions still linger about what the Gaza strikes are designed to accomplish, really. The IDF says the ground assault's objective is "to destroy the terrorist infrastructure of the Hamas in the precise area of operation, while taking control of some of rocket launching area used by the Hamas in order to greatly reduce the quantity of rockets fired at Israel and Israeli civilians." But Israeli politicians are making are making noises about the need to "reach a situation in which we do not allow Hamas to govern."

israel sends ground troops into gaza
from kurt nimmo: On Saturday, Israel graduated from its murderous bombing raids on Gaza to sending soldiers into the locked-down territory. “For the first time since the start of Operation Cast Lead, IDF ground troops entered the Gaza Strip on Saturday evening, exchanging fire with Hamas gunmen,” reports the Jerusalem Post. “The IDF said that a large amount of troops from the Armored Corps, Engineering Corps and Infantry Corps entered the territory with the purpose of destroying Hamas infrastructure… The IDF warned that terrorists using civilians as human shields would bear full responsibility for their fate.”

israelis leave voicemail messages before they bomb buildings
from dpa: The Israeli Army has launched 'roof knocking' operations by which the occupants of the buildings in Gaza they about to bomb are warned beforehand, Israeli media reports said Friday. Warnings, issued by telephone, voicemail or SMS, were intended as a means of limiting civilian casualties in the conflict, the Haaretz newspaper said. Civilians were given 10 minutes to leave the premises. An Israeli Army spokesman declined to confirm the reports or respond to questions about such tactics being used in its ongoing confrontation with Palestinian militants. 'In some cases advance warnings are given to reduce the number of victims,' he said. The Israeli Army apparently used 'roof knocking' in its killing of senior Hamas official Nizar Rayan on Thursday, Haaretz reported. His family had received warning that the building was about to be attacked, but they had decided to remain inside, the newspaper said.

what helped the rise of hamas? USrael policies, of course
from mcclatchy: In August 2005, when Israel unilaterally withdrew from the narrow coastal territory, then-Israeli Prime Minister Ariel Sharon promised it would make Israel safer. Secretary of State Condoleezza Rice hailed the move as “historic.” Israel had left behind a political vacuum, however. That, along with decisions by Israel, the U.S. and Palestinian rivals inadvertently boosted the militant Islamic group Hamas into power. Hamas is stronger than ever, and Israel’s air strikes risk bolstering it further, according to current and former U.S. officials, diplomats and analysts.

(Editor’s note: In fact, Hamas is part of a larger intelligence operation spawned from the Muslim Brotherhood, long ago compromised by British intelligence and the CIA. Israel “aided Hamas directly - the Israelis wanted to use it as a counterbalance to the PLO (Palestinian Liberation Organization),” Tony Cordesman, Middle East analyst for the Center for Strategic Studies, told Richard Sale of the UPI in 2002. Sale’s original report has since found the memory hole.)

Lie #2) Hamas violated the cease-fire. The Israeli bombardment is a response to Palestinian rocket fire and is designed to end such rocket attacks.

Lie #4) Arab nations have not condemned Israel’s actions because they understand Israel’s justification for its assault.

Lie #5) Israel is not responsible for civilian deaths because it warned the Palestinians of Gaza to flee areas that might be targeted.

US weapons 'killing innocent civilians' in gaza
from raw story: As Israeli warplanes continue to bomb Gaza, attention is turning to the role of American-made weapons in the deadly attacks, which have now killed over 400 and wounded 2000, including many civilians. CNN Pentagon correspondent Barbara Starr believes that Israel's use of American weapons against civilians "is becoming very problematic." She notes, for example, that the 2000 pound bomb which killed a Hamas leader and members of his family on Thursday "is part of the billions of dollars that Israel has spent buying weapons from the United States."

US media coverage of gaza invasion largely biased towards israel
from editor & publisher: Israel launched its much-anticipated invasion of Gaza on Saturday. For over a week, U.S. media had provided largely one-sided coverage of the conflict, with little editorializing or commentary arguing against broader Israeli actions. Most notably, after more than eight days of Israeli bombing and Hamas rocket launching in Gaza, The New York Times had produced exactly one editorial, not a single commentary by any of its columnists, and only two op-eds (one already published elsewhere). The editorial, several days ago, did argue against the wisdom of a ground invasion - but even though that invasion had become ever more likely all week the paper did not return to this subject. Amazingly, the paper has kept that silence going in Sunday’s and even Monday’s paper, with no editorial or columnist comment on the Israeli invasion - beyond a hawkish pro-invasion contribution by William Kristol. It’s as if the Times is waiting for the invasion to be over and adapt its position to the outcome. The Washington Post did manage to work up an editorial for Sunday which, in the usual contortionist manner, found the invasion “justified” but also highly “risky.”

from press tv: Medics tell Press TV they have found traces of depleted uranium in some Gaza residents wounded in Israel's ground offensive on the strip. Norwegian medics told Press TV correspondent Akram al-Sattari that some of the victims who have been wounded since Israel began its attacks on the Gaza Strip on December 27 have traces of depleted uranium in their bodies. The report comes after Israeli tanks and troops swept across the border into Gaza on Saturday night, opening a ground operation after eight days of intensive attacks by Israeli air and naval forces on the impoverished region.

norwegian doctor in gaza: israel targeting civilians
from raw replay: Mads Gilbert, a Norwegian doctor working in Gaza, told Sky News that that the number of civilians injured and killed in Gaza proves that Israel is deliberately attacking the population.

why obama is silent on gaza?
from blacklisted news: If you look a few months back to when Obama was speaking at AIPAC, the American Israel Public Affairs Committee, you’ll find your reasons why he is silent on the current Gaza situation. As of right now, the Israeli government is invading and pillaging Gaza and not a word from Obama. His spokesman David Axelrod claims that he isn’t commenting because “..There is only one president at a time,” yet that didnt stop him with nearly every other issue such as the Mumbai attacks, and the Russia/Georgia conflict. Here is why: At the AIPAC in mid 2008, Obama speaks of a “strong commitment to make sure that the bond between the United States and Israel is unbreakable today, tomorrow and forever.” Implying that no matter what war crimes and atrocities the government of israel commits, the United States run by Obama will always lend support. “We must preserve our total commitment to our unique defense relationship with Israel by fully funding military assistance and continuing work on the Arrow and related missile defense programs..” Here are other quotes from Obamas AIPAC speech, illustrating exactly why he is not saying anything about the Gaza attack. Read the full speech by Obama at AIPAC here.

stealing gaza: an experiment in provocation
from brian eno: It's a tragedy that the Israelis - a people who must understand better than almost anybody the horrors of oppression - are now acting as oppressors. As the great Jewish writer Primo Levi once remarked "Everybody has their Jews, and for the Israelis it's the Palestinians". By creating a middle Eastern version of the Warsaw ghetto they are recapitulating their own history as though they've forgotten it. And by trying to paint an equivalence between the Palestinians - with their homemade rockets and stone-throwing teenagers - and themselves - with one of the most sophisticated military machines in the world - they sacrifice all credibility.

update1: israel bombs palestinian school, kills 30
from bbc: At least 30 people were killed and 55 injured when Israeli artillery shells landed outside a United Nations-run school in Gaza, UN officials have said. A number of children were among those who died when the al-Fakhura school in the Jabaliya refugee camp was hit, doctors at nearby hospitals said. Israel said its soldiers had come under fire from militants inside the school. Earlier, the International Committee of the Red Cross (ICRC) warned of a "full-blown humanitarian crisis" in Gaza. Speaking on the 11th day of the Israeli assault, a senior ICRC official, Pierre Kraehenbuhl, said life in Gaza had become intolerable.

update2: video: cnn confirms israel broke cease fire
from bediertv: Rick Sanchez does the research and finds that Israel violated the terms of the ceasefire first by killing 6 Gazans on November 4. Shouldn't media outlets check the facts before running with a story?

update3: bbc blackout on gaza
from london daily news: The London Daily News has learned there is an informal news blackout at BBC Radio over the mounting public outrage following the Gaza incursion by Israeli troops. According to sources, radio station phone in's have been screening out any callers wanting to talk about the Israeli air strikes and ground offensives in the Middle East. The BBC's Have Your Say comment sites are being heavily moderated - its main board 'How can a truce be achieved in Gaza?' has had half of its 4,500 comments rejected on the basis of defamation, incitement to crime and hate, harassment, abuse, threats, harmful, obscene, profane, sexually oriented, homophobic or racially offensive language. On the board 'Are the Israeli strikes on Gaza justified?' Half of the 5,000 comments have also been removed for breaking the House Rules stated above.

from press tv: The Israeli incursions into Gaza have triggered protests all over the world with demonstrators calling for an immediate ceasefire. Public fury at the Israeli violence targeting the residents of Gaza has brought thousands of people in Turkey, Argentina, Mexico, Bolivia, Lebanon and Austria to the streets.