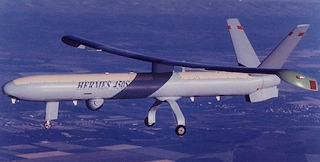 Israel's dominance of drone industry dates back decades, first country to make widespread use of surveillance drones in 1982 invasion of Lebanon.  Jefferson Morley writes in Salon article, "Israeli's Drone Dominance," Israel creates subsidiaries of state-owned Israel Aerospace Industries to produce drones in client countries to increase sales.  Stark Aerospace of Mississippi was set up in 2006 by Israel inside United States. "Stark...is perhaps the only foreign-owned company with FAA permission to fly a drone in U.S. airspace," writes Morley, and by 2007, "Stark  'inaugurated its first production outfit, which makes Hunter unmanned vehicles that it sells through Northrop Grumman. In fact, the U.S. armed forces have been using [Israeli-made] Hunter drones since the early 1990s.'”  Morley reveals, also, US dependence on Israel for domestic surveillance, "Not surprisingly one of the first uses of drones by the Department of Homeland Security was to monitor the U.S.-Mexico border, where it now flies Israeli-made Hermes 450 drones." Wow!