James Fox UFO Video: “I Know What I Saw” 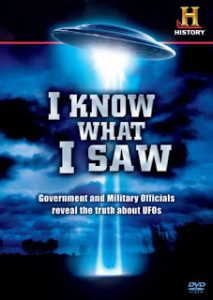 The I Know What I Saw website provides the following synopsis of a UFO film by James Fox. “‘I Know What I Saw’ is a new UFO documentary guaranteed to change the way we see the universe. Director, James Fox assembled the most credible UFO witnesses from around the world to testify at The National Press Club in Washington D.C.: Air Force Generals, astronauts, military and commercial pilots, government and FAA officials from seven countries tell stories that, as Governor Fife Symington from Arizona stated, ‘will challenge your reality’.” The film includes interviews of former Iranian pilot Parviz Jafari, who related his 1976 UFO encounter over Tehran. There’s also several interviews of Stephenville, TX residents, who witnessed in January 2008 a huge silent UFO there. The descriptions are very similiar in both the Stephenville, TX UFO and those of the craft to literally fly over much of Arizona in the Phoenix Lights case. It’s a huge dull matte black finish or bluish black UFO that blocks out much of the sky and has a wavy “heat mirage” image quality. The present writer keeps thinking the military is laughing at us “plebs”. A well-done film that is well worth 90 minutes of your time.