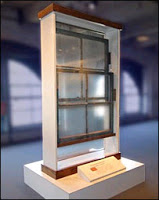 from bbc: An item described as the window and frame from where Lee Harvey Oswald shot US President John F Kennedy in 1963 has been sold at auction on eBay.

A mystery bidder paid more than $3m (£1.5m) for the item, apparently from Oswald's shooter's nest at the Texas Schoolbook Depository.

The depository was owned by a local family that listed the item on eBay.

Caruth Byrd, a member of that family, says the window of the Dallas building was removed shortly after the assassination because people were stealing bits of it.

Mr Byrd said he was offering someone the chance to own a piece of history and included what he called a leather-bound booklet with all the documentation and contracts relating to the window and the frame's authenticity.

Aptly, given the subject matter, there are those who suggest that the bidders are being hoodwinked.

Conspiracy theorists claim that a man from Tennessee bought the building years ago and took the window with him when he left town.