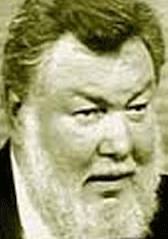 A career more akin to fiction of  H.P. Lovecraft, Louis Jolyon West left behind legacy still affecting America.   West seems to have surpassed Lovecraft's character Herbert West for hideous hyper-scientific manipulation of world around him.  It must be said, West viewed Scientology as a dangerous cult to his credit.   The source of following article, "A Clockwork Orange Career," from Scientology, still doesn't excuse a crazy perp.  In more recent years, West headed the UCLA Neuropsychiatric Institute, where he experimented on prisoners with chemical castration among other means of controlling behavior.  The research West conducted much of it funded by CIA through the National Institute of Health.  Perhaps, the most egregious event in West's twisted career was 1962 fatal dosing of an Oklahoma City zoo elephant with LSD while at the University of Oklahoma:

"West’s career highlights included injecting a 7,000-pound bull elephant, Tusko, with an overwhelming dose of LSD — roughly 1,435 times the quantity, in West’s own words, one would have given to a human “to produce for several hours a marked mental disturbance.” Not surprisingly, the elephant collapsed in agony minutes later and died.

West had ingested the mind-altering substance himself shortly before killing Tusko, the prize of the Oklahoma City Zoo, and was evidently still under its influence at the time he sloshed through the beast’s entrails, performing an 'autopsy' which he recorded on film. He later issued a report to advance his 'discovery' that elephants could be killed with LSD and to promote use of the drug to cull elephant herds in Africa."

The behavior surrounding Tusko's death certainly smacks of Lovecraft fiction.   West's unmitigated gall in producing a paper as if it was valid scientific conclusion, makes you wonder?  Are we talking about the same West?   Wouldn't this be what Herbert would do?