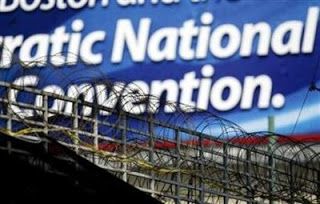 from reuters: Protesters at the Democratic National Convention in Denver can be restricted to fenced-in areas, federal judge ruled on Wednesday, saying that security needs outweighed curbs on their rights.

A dozen groups who intend to protest at the August convention sued the U.S. Secret Service and the city of Denver over plans to confine their activities to a parade route and fenced-in zone, saying that their Constitutional rights to free speech were being violated.

The American Civil Liberties Union, the American Friends Service Committee and others argued that the rules would keep them too far away from delegates to get their message across during the convention, which is scheduled for Aug 25-28 at the city's downtown Pepsi Center.

U.S. District Judge Marcia Krieger agreed that the protesters would suffer some infringement on their freedom of expression but said those interests had to be balanced with security concerns.

"The restrictions inhibit the plaintiffs' ability to engage in some forms of expressive conduct, (but) ... the plaintiffs have a wide variety of alternative means of expression that will allow them to effectively communicate their messages," Krieger wrote in her 71-page ruling.