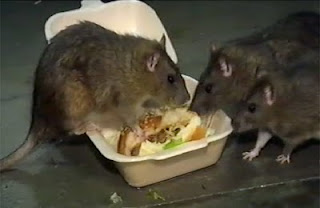 from natural news: A diet including unlimited amounts of junk food can cause rats to become so addicted to the unhealthy diet that they will starve themselves rather than go back to eating healthy food, researchers have discovered.

In a series of studies conducted over the course of three years and published in the journal Nature Neuroscience, Scripps Florida scientists Paul Johnson and Paul Kenny have shown that rats' response to unlimited junk food closely parallels well-known patterns of drug addiction - even down to the changes in brain chemistry.

"What we have are these core features of addiction, and these animals are hitting each one of these features," Kenny said.

In their first study, the researchers fed rats on either a balanced diet or on the same diet plus unlimited access to junk foods purchased at a local supermarket, including processed meats and cakes. Within a short time period, the rats on the junk food diet began to eat compulsively and quickly became overweight.