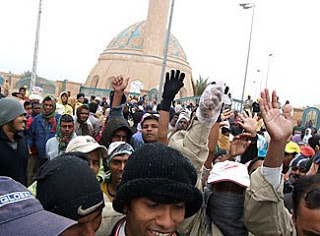 from danger room: KBR, the defense services giant, and its subcontractors have been repeatedly accused of using slave labor in Iraq. But despite the lawsuits, and despite the Congressional hearings, KBR and its business partners keep getting busted for treating its workers like little more than chattel. The latest: "About 1,000 Asian men who were hired by a Kuwaiti subcontractor to the U.S. military have been confined for as long as three months in windowless warehouses near the Baghdad airport without money or a place to work," McClatchy reports. "Najlaa International Catering Services, a subcontractor to [former Halliburton subsidiary] KBR... hired the men, who are from India, Nepal, Sri Lanka, and Bangladesh."

update: iraqi police surround ’slave labor’ camp
from raw replay: CNN’s Michael Ware reports that Iraqi police have surrounded a ’slave labor camp’ where over 1000 workers are being held in a warehouse. This video is from CNN’s American Morning, broadcast Dec. 5, 2008.

related: suit claims halliburton & kbr sickened base
from air force times: A Georgia man has filed a lawsuit against contractor KBR and its former parent company, Halliburton, saying the companies exposed everyone at Joint Base Balad in Iraq to unsafe water, food and hazardous fumes from the burn pit there. Joshua Eller, who worked as a civilian computer-aided drafting technician with the 332nd Air Expeditionary Wing, said military personnel, contractors and third-country nationals may have been sickened by contamination at the largest U.S. installation in Iraq, home to more than 30,000 service members, Defense Department civilians and contractors.