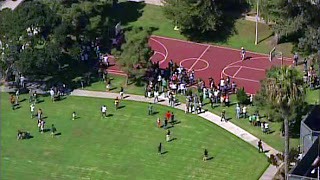 kelly school shooter: ‘this is a drill & these are blanks.’

please read the full article for more on this bizarre story

from deadlinelive.info: On Friday, October 8th, Brendan O’Rourke entered Kelly Elementary schoolyard during noon recess, carrying a .357 magnum and firing on students, allegedly striking two of them in the arm. After firing six shots, O’Rourke fled the schoolyard and attempted to reload his handgun. A construction crew working at the school cafeteria was able to catch O’Rourke and hold him until police arrived on the scene. Stephanie Durkee, a campus monitor at the school for 17 years, said O’Rourke was yelling when he entered the playground and started shooting. Durkee said O’Rourke shouted “Death to Obama! Kill all the little fags! Death to them!” Durkee said when she asked him what he was doing, he replied, “This is a drill and these are blanks.”