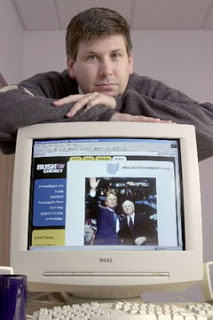 from velvet revolution: Michael Connell, the Bush IT expert who has been directly implicated in the rigging of George Bush’s 2000 and 2004 elections, was killed last night [dec19] when his single engine plane crashed three miles short of the Akron airport. Velvet Revolution (“VR”), a non-profit that has been investigating Mr. Connell’s activities for the past two years, can now reveal that a person close to Mr. Connell has recently been discussing with a VR investigator how he can tell all about his work for George Bush. Mr. Connell told a close associate that he was afraid that George Bush and Dick Cheney would “throw [him] under the bus.”

A tipster close to the McCain campaign disclosed to VR in July that Mr. Connell’s life was in jeopardy and that Karl Rove had threatened him and his wife, Heather. VR’s attorney, Cliff Arnebeck, notified the United States Attorney General , Ohio law enforcement and the federal court about these threats and insisted that Mr. Connell be placed in protective custody. VR also told a close associate of Mr. Connell’s not to fly his plane because of another tip that the plane could be sabotaged. Mr. Connell, a very experienced pilot, has had to abandon at least two flights in the past two months because of suspicious problems with his plane. On December 18, 2008, Mr. Connell flew to a small airport outside of Washington DC to meet some people. It was on his return flight the next day that he crashed.
(mark crispin-miller on mike connell from july24,2008)

killed pilot accused of rigging vote for gop
from raw replay: 19 Action News reported on a plane crash that resulted in the death of Michael Connell. Connell was a Republican media consultant for George Bush and John McCain. Connell had been accused of rigging the 2004 presidential election in Ohio but he denied the charges under oath.

connell was warned not to fly before plane crash
from wayne madsen: WMR has learned from knowledgeable sources in Ohio that Republican Party computer networking guru Mike Connell was warned not to fly in anonymous warnings conveyed to principals in the ongoing federal civil lawsuit of King Lincoln Bronzeville Neighborhood Association v. Blackwell, stemming from GOP-engineered vote fraud in the 2004 Ohio presidential election, as well as a potential Ohio racketeer-influenced criminal organization (RICO) criminal proceeding against former Bush White House aide Karl Rove and Blackwell, in the conspiracy to illegally steer Ohio’s 20 electoral votes to the Bush column in 2004.

was connell crash an accident or murder?
from raw story: The death of Republican “IT guru” Mike Connell last Friday in a fiery plane crash has been the subject of intense speculation online about whether it might have been murder – but very little of that speculation has made it into the national media. Now one local TV station in Connell’s home state of Ohio is acknowledging that there are questions about his death. “Well, this sounds like a made up story,” Scott Taylor of 19 Action News in Cleveland began. “One man rigging state elections to help his boss, President George Bush. After it’s done, power players in Washington say ‘Get rid of the guy.’ Do I believe it? No — for now.” Taylor noted that “bad weather could have played a part in the crash” but “some in Washington have a different opinion.”

video: raw eyewitness footage of burning wreckage at connell crash
from bradblog: I’m not sure what, if any, light this video – as shot by local eye and ear-witnesses in Akron, OH – sheds on the plane crash and death of high-ranking GOP IT operative Mike Connell. But, as it may reveal something, to somebody, in the still-unexplained, and surprisingly-timed crash, I suppose it may useful to put it on the record here.