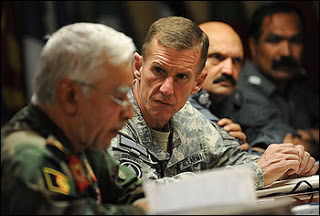 from washington times: Gen. Stanley McChrystal, the top U.S. and NATO commander in Afghanistan, said in a confidential report that without additional forces, the war against insurgents there will end in failure, The Washington Post reported Monday. McChrystal's grim assessment of the war was published on the Post's Web site, with some portions withheld at the government's request. "Although considerable effort and sacrifice have resulted in some progress, many indicators suggest the overall effort is deteriorating," McChrystal wrote in his summary. The report was sent to Defense Secretary Robert Gates in August and is now under review by President Barack Obama, who is trying to decide whether to send more U.S. troops to Afghanistan.