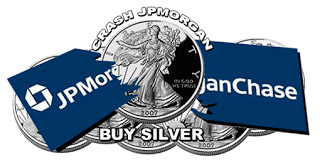 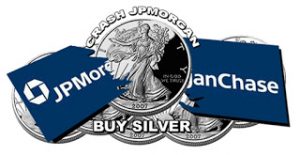 from washington's blog: Leading economists and financial experts say that our economy cannot recover until the too big to fails are broken up. See this and this. The giant banks have been sucking money out of the real economy and making us all poorer. But the government is refusing to even rein in the mega-banks, let alone break them up. One of the too big to fails - JP Morgan - manipulates the silver market. See this, this, this, this and this.

According to the National Inflation Association, JP Morgan is “short 30,000 silver contracts representing 150 million ounces of silver. This is one of the largest concentrated short positions in the history of all commodities, representing 31% of all open COMEX silver contracts.” This could leave JP Morgan exposed if people go out and buy physical silver in large numbers.

Mike Krieger and Max Keiser have an idea for attacking the weak underbelly of the seemingly invincible too big to fail banks and market manipulators ... all at the same time. Specifically, they say that if everyone buys just 1 ounce of silver, it will force JP Morgan - a giant manipulator of the silver market - to cover its short positions, and drive it out of business.