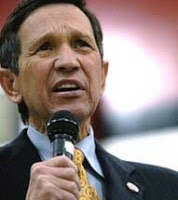 from raw story: Rep. Dennis Kucinich says he is so concerned about what he sees as the Bush administration's push for a war with Iran that he is considering using a parliamentary measure to force the House of Representatives to vote on impeaching Vice President Dick Cheney.

"We're preparing for another war, and they're going to destroy America," the Ohio Democrat said Thursday on the Ed Schultz show. "We have a government in place right now that has to be challenged. I'm seriously thinking about calling a privileged resolution on impeachment of the vice president and forcing a vote on the floor of the House."

A privileged resolution would force the full House to debate about whether to proceed with impeachment, but it remains unclear precisely how, when or whether Kucinich would be able to introduce such a resolution. Privileged measures "may be called up on the floor whenever another measure is not already pending" and the House agrees to consider it, according to the Congressional Research Service.

Privileged measures can include questions of House privileges or resolutions of inquiry, according to the CRS report.

A conservative site set up to push for former President Bill Clinton's impeachment lays out a strategy to bring such a measure to the House floor.

"According to Jerome Zeifman, however, it is possible that such a resolution could be called up for an immediate vote," the Conservative Caucus site observes. "But that option appears to be within the control of the Speaker of the House and the Majority Leader."

House Speaker Nancy Pelosi, who took control after last year's Democratic takeover of Congress, maintained that impeachment is "off the table" as recently as this week in an interview with CNN.

Kucinich introduced a resolution calling for Cheney's impeachment this spring. Since then the bill has gained more than a dozen co-sponsors, but it seems to be dying a slow death in the House Judiciary Committee. It's chairman, John Conyers, has stood with Pelosi in refusing to debate the impeachment resolution or bring it to the House floor for a vote.

A Kucinich spokeswoman declined to comment when contacted by Raw Story. An official in the House Parliamentarian's office did not return a call seeking comment.

The following audio clip is from The Ed Schultz Show, broadcast on September 27.