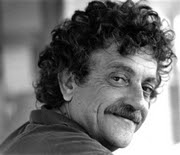 from afp: Kurt Vonnegut, the creator of wry science fiction and black comedy built on his experience as a World War II prisoner of war who survived the horrific Dresden bombing, died late Tuesday, the New York Times reported.

Vonnegut was the author of “Slaughterhouse-Five,” widely rated as one of the finest American novels of the 20th century, “Cat’s Cradle,” and “Breakfast of Champions.”

He died aged 84 in New York City after suffering brain injuries in a fall several weeks ago, according to his longtime friend Morgan Entrekin, the Times reported on its website Wednesday…

Months before the March 2003 invasion of Iraq, he bemoaned the coming war:

“I myself feel that our country, for whose Constitution I fought in a just war, might as well have been invaded by Martians and body snatchers.”