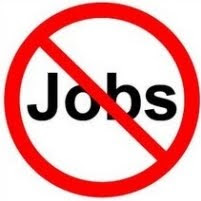 labor day 2011: what are we celebrating, the lack of jobs in america?

from the economic collapse blog: If you still have a good job, you certainly have something to celebrate on Labor Day 2011. So far you have survived the decline of the U.S. economy. But your day may be coming soon. This weekend, there will be millions of Americans that will not be doing any celebrating. They are not enjoying a break from their jobs because they don't have any jobs. In fact, it seems kind of heartless for the rest of us to be celebrating while so many of our countrymen are destitute. What are we celebrating on Labor Day 2011? The lack of jobs in America? At this point, the U.S. economy closely resembles a gigantic game of musical chairs. Every time the music stops, even more good jobs are pulled out of the game and even more workers are added. Once upon a time, if you really wanted a job in America you could get one. But now the competition for even the most basic jobs is absolutely brutal. If you gathered together all of the unemployed people in the United States, they would constitute the 68th largest country in the world. It would be a nation larger than Greece. All of those unemployed people are not going to be taking trips with their families this holiday weekend. Instead, most of them are going to be trying to figure out what to do with their shattered lives.