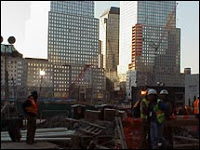 larry ‘pull it’ silverstein makes more money off of wtc

from daily press: The World Trade Center site's owner will pay millions in fines for falling at least a month behind on a deadline to turn over part of the site to a private developer building office towers there.

The Port Authority of New York and New Jersey will pay between $9 million and $13.5 million to Larry Silverstein for failing to excavate foundations for two of five planned skyscrapers at the site by today, its director said Monday.

The Port Authority set the deadline - and $300,000-a-day penalties if it didn't deliver the land on time — in a contentious renegotiation of Silverstein's lease in 2006 that officials said would help speed up long-stalled development at the 16-acre site.

The agency's executive director, Anthony Shorris, said Monday that contractors worked 20-hour-a-day schedules for months and have removed 300,000 tons of material — enough to fill Giants Stadium — but could not finish by the deadline.

"They were ambitious goals. We did our best to meet them," Shorris said. "This is an enormous project. ... I wished we'd be right on schedule."

Shorris said the land would be completely excavated in four to six weeks. The job's contractor is losing a $10 million bonus it was promised if it met today's deadline, Shorris said.

Silverstein's company hired a contractor in November to build the two towers' foundations and said it will make other preparations to be able to start building as soon as the Port Authority turns over the land.

"We appreciate how much the Port Authority has accomplished this year, and a few extra weeks to complete everything is a minor bump in the road in the context of this entire project," said Janno Lieber, who oversees the trade center project for Silverstein.

Silverstein, who leased the trade center complex six weeks before 9/11, gave up rights to the Port Authority to build two of the five planned office towers at ground zero.