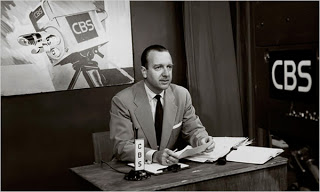 ...now walter cronkite can truly be
"glad to sit on the right hand of satan"...

from dpa: Iconic news anchor Walter Cronkite, whose journalism shaped US views and policies from World War II to the Vietnam War died Friday at the age of 92, his family said.

Cronkite, who was born in St Joseph, Missouri, in 1916, had been ill for several months with cerebrovascular disease. Among the many paying tribute to him were President Barack Obama and his predecessor George W Bush.

Often called "the most trusted man in America," Cronkite's deliberate reporting and analysis, together with his rare displays of emotion made him a key observer and interpreter of seminal moments in US history including the Kennedy assassination, the civil rights struggle and the moon landing.

Regarded as one of the all time greats of US journalism, Cronkite also played a decisive role in establishing television as a leading news medium and in defining the standards for news anchors during his stint as anchor at CBS News from 1962 to 1981.

Obama called him "a voice of certainty in an uncertain world... For decades, Walter Cronkite was the most trusted voice in America. His rich baritone reached millions of living rooms every night," said Obama. "He invited us to believe in him, and he never let us down."

"Walter Cronkite was an icon of American journalism who shaped his profession in countless ways during his decades on the air. Tonight, his family is in our thoughts and prayers," Bush said.

"It is impossible to imagine CBS News, journalism or indeed America without Walter Cronkite," Sean McManus, president of CBS News, said in a statement. "More than just the best and most trusted anchor in history, he guided America through our crises, tragedies and also our victories and greatest moments."

Cronkite established his legendary reputation with his marathon coverage of the assassination of president John F Kennedy in 1963. His sympathetic reporting of the civil rights struggle was key in winning over American public opinion, while his conclusion that the Vietnam War was unwinnable in 1968 eroded the support of middle America for the controversial conflict. "If I've lost Cronkite, I've lost Middle America," said President Lyndon Johnson after Cronkite concluded that the war could not be won.

Katie Couric, the current anchor of the CBS Evening News, said Cronkite was so trusted "because he exhibited a sense of purpose and compassion, night after night. He was the personification of excellence."

from kurt nimmo: “It is impossible to imagine CBS News, journalism or indeed America without Walter Cronkite,” said Sean McManus, president of CBS News, on the passing on Walter Cronkite. “More than just the best and most trusted anchor in history, he guided America through our crises, tragedies and also our victories and greatest moments.”

I wonder if Mr. McManus knew the real Cronkite — Cronkite the a former intelligence officer who was lured away from his UPI Moscow desk by Operation Mockingbird’s Phil Graham.

Of course he did. Because the corporate media, at least at the level Walter Cronkite occupied, is rife with spooks, government agents, and disinfo operatives. The CIA has “important assets” inside every major news publication in the country, a fact established by numerous FOIA documents. A rare glimpse was also provided by Frank Church’s committee in the mid-70s.

Some of the journalists working the CIA’s side of the street “were Pulitzer Prize winners, distinguished reporters who considered themselves ambassadors-without-portfolio for their country,” Carl Bernstein wrote in an article published in Rolling Stone in October, 1977. “Most were less exalted: foreign correspondents who found that their association with the Agency helped their work; stringers and freelancers who were as interested it the derring-do of the spy business as in filing articles, and, the smallest category, full-time CIA employees masquerading as journalists abroad.”

“It was not until 1982 that the Agency openly admitted that reporters on the CIA payroll have acted as case officers to agents in the field,” writes Alex Constantine in The Depraved Spies and Moguls of the CIA’s Operation MOCKINGBIRD. “Most consumers of the corporate media were — and are — unaware of the effect that the salting of public opinion has on their own beliefs... In the 1950s, outlays for global propaganda climbed to a full third of the CIA’s covert operations budget. Some 3, 000 salaried and contract CIA employees were eventually engaged in propaganda efforts. The cost of disinforming the world cost American taxpayers an estimated $265 million a year by 1978, a budget larger than the combined expenditures of Reuters, UPI and the AP news syndicates.”

Cronkite was a trusted and valued part of that huge mass propaganda effort.

and even george carlin didn't "believe that shit" either...