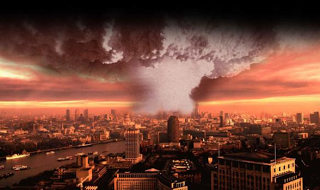 from the intel hub: 25 letters that claim nuclear bombs are hidden throughout the United States have been sent to multiple investigators and citizens in the Chicago area. The letter inside said, “The Al-Qaeda organization has planted 160 nuclear bombs throughout the U.S. in schools, stadiums, churches, stores, financial institutions and government buildings.” It also said, “This is a suicide mission for us,” reported CBS Chicago.

While this news may be startling to many, it is no surprise to those in the alternative media. The idea of nukes in the United States has run rampant for years, with many believing rogue elements of our government will actually use these nukes within the United States to create enough chaos to initiate a world government. In 2002 the right wing news organization World Net Daily reported that Bin Laden had snuck over 20 suitcase nukes into the United States... This report was one of the first out of a long line of fear mongering reports that have been used to plant the idea of Al Qaeda nuking us into the mind of everyday American citizens. Most remember the “missing nukes” report that broke in 2007... The story was first reported by the Military Times, after military servicemen leaked the story...

The fact that the Pentagon and the CIA run Al Qaeda, have dined with top “terrorist” Anwar al-Awlaki, and openly fund Al Qaeda seems to be unimportant to the corporate controlled media. This isn’t a realistic option yet reports like this are used to trick ignorant Americans into hating Muslims even more. This also gives elements of our government the ability to say, “told you so” if or when a nuke detonates in an American city.