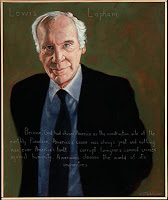 lewis lapham of harper’s magazine on 9/11

from 9/11 blogger: On Sunday June 3, Lewis Lapham was featured on a 3-hour program on C-SPAN's "In Depth" program. The program focused on Lapham's intellectual life and times, and took calls from the live C-SPAN viewership. During the course of taking calls, one caller asked about Lapham's views on 9/11 as being something other than the Official Conspiracy Theory. Here is what Lapham had to say:

"As to the question of what happened at 9/11, I am reading at the moment a book by a man named David Griffin, on the debunking of the 9/11 debunking, and he raises a number of sharp questions... which I think deserve further questioning and investigation, but I am not as yet prepared to think that the bringing down of the... trade towers was the work of the Bush administration."

Harper's magazine reflects the current political and social thinking of a segment of America's elite, namely, a segment that reads. It is also a magazine for the reading American public that consider themselves "progressives" generally. Harper's was one of the first publications to print a long critical essay about the 9/11 Commission's Final Report, that still resonates today; Whitewash as public service by Benjamin DeMott.

When a serious thinker, writer, and shaper of the American cultural soul is reading David Ray Griffin, I would have to say that progressives and Leftists who will have no truck with questions about 9/11 need to pause and reflect on this. Knee-jerk time is over. It's time to pick up Griffin's books and become familiar with them, and become familiar with the serious aspects of 9/11 skepticism. Lapham is reading Griffin. After Gore Vidal's endorsement of The New Pearl Harbor, an open-minded Liberal really has no excuse not to give 9/11 skeptics like Griffin a fair shake anymore. This means actually reading the books, not just snarking at them.

See the stream from the C-SPAN archive (approx. 53 minute mark)

Big tip of the hat to "alexjonesfan" who posted a condensed version of this news item at The Randi Rhodes Message Board. Take a minute to write to Harper's and ask Lapham to review Griffin's book: letters(at)harpers.org

also, here is a link to the pertinent audio