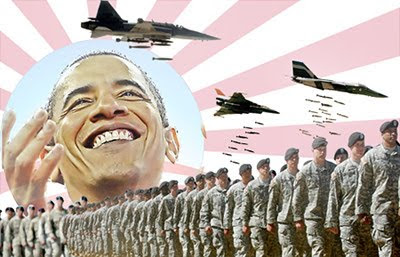 from activist post: It's perplexing to see a high level of support for the unprovoked bombing of Libya on so-called "progressive" websites. There has been an endless stream of humanitarian propaganda flowing from these sites trying to convince average liberals that the "human thing to do" is to rain down tomahawk missiles with depleted uranium to bring freedom and democracy to an oppressed people. Huffington Post ran a piece by Ed Schultz titled Why I Support President Obama's Decision to Invade Libya where he described his reasoning as follows:

"President Obama explained this won't be a long-term operation... Matter of days, not a matter of weeks. Not even months... He's (Obama) trying to give the rebels, those who want democracy, a fighting chance at just that and trying to stop Gaddafi -- this is the human thing to do -- from slaughtering his own people."

By the very use of the word "invade" in the title, Schultz would seem to understand that the continued military support is likely to last for quite some time. Indeed, this was confirmed on Sunday morning when Defense Secretary Gates and Secretary of State Hillary Clinton hinted that the operation could indeed last for months, which seems to debunk Schultz's main argument that it's only a days-long conflict. This justification is reminiscent of Wolfowitz and Rumsfeld falsely stating that the Iraq war would be quick and easy -- only cost a couple of a billion dollars that would be paid for by Iraqi oil.

Establishment progressives can no longer hide behind phony labels. They have officially joined the ranks of the War Party serving up American blood and treasure to support profits for the military-industrial complex and Big Oil, while compromising on austerity cuts at home.