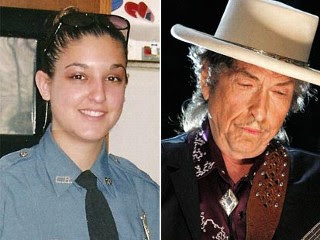 like a complete unknown: dylan hassled by uncool cops

a novice policewoman picked up an "eccentric old man acting suspiciously", completely unaware that it was bob dylan...

from telegraph: The 22-year-old officer was dispatched after residents in the New Jersey town of Long Branch had phoned to complain that a man in the Latin quarter was acting suspiciously. When the officer asked the man for identification papers, he did not have a driving licence or other form of ID to prove his identity. The songwriter, famous for hits such as Like a Rolling Stone and Mr Tambourine Man, was then ordered into the back of her police car and driven back to his hotel to authenticate his story. It was not until she radioed her colleagues at the police station to ask who he was did she realise her mistake.

A spokesman for Long Branch police confirmed the incident with Dylan took place last month at the seaside town on the Jersey shore. "It has been the talk of the station," said one officer... The policewoman was very young and did not recognise Dylan. There was another officer with her and even he did not recognise Dylan... Both said they never listened to his music and had no idea what he looked like."

Dylan, 68, who was in the area for a concert with Willie Nelson and John Mellencamp, has been spotted out alone previously. Rather than use a chauffeur-driven car after a concert in belfast in 1991, he was spotted waiting at a bus stop by a television crew. Earlier this year, Dylan climbed back to the top of the British charts for the first time in 38 years with his album Together Through Life.