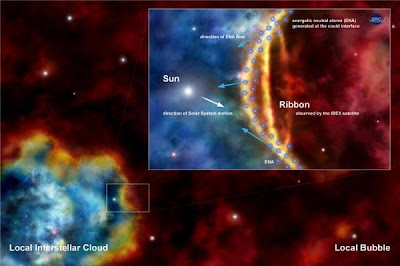 Zen Gardner captures imagination and admiration in attempt to provide us with  comprehensive “local space weather” in post, “Is NASA Tracking The Cosmic Shift?“ It may be difficult to visualize mentally space weather the Solar System is currently passing, so concise description from article works well:

“‘The Sun traveling through the Galaxy happens to cross at the present time a blob of gas about ten light-years across, with a temperature of 6-7 thousand degrees kelvin. This so-called Local Interstellar Cloud is immersed in a much larger expanse of a million-degree hot gas, named the Local Bubble. The energetic neutral atoms (ENA) are generated by charge exchange at the interface between the two gaseous media. ENA can be observed provided the Sun is close enough to the interface. The apparent Ribbon of ENA discovered by the IBEX satellite can be explained by a geometric effect: one observes many more ENA by looking along a line-of-sight almost tangent to the interface than by looking in the perpendicular direction.'”

Gardner putting it together cites NASA source, “Mystery of the Giant Ribbon Solved,” an excerpt follows:

“The IBEX data fit in nicely with recent results from Voyager. Voyager 1 and 2 are near the edge of the solar system and they also have sensed strong magnetism nearby. Voyager measurements are relatively local to the spacecraft, however. IBEX is filling in the “big picture.” The ribbon it sees is vast and stretches almost all the way across the sky, suggesting that the magnetic field behind it must be equally vast.”

A reader wonders if interaction will increase at Solar System’s edge? How much more will magnetic field emanating from Local Cloud impinge upon the Heliosphere? Gardner asks, in turn, the obvious, “Is the Sun going to enter soon a million-degree galactic cloud of interstellar gas?” It’s an excellent attempt by Zen Gardner to build upon individual reports to see greater implications of space weather – hats off!