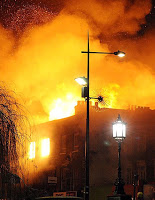 ...watch this post for any updates on false flags, provocateured violence &/or the demonization of peaceful demonstrations...

from raw replay: World leaders wrangled Wednesday on how a London summit could fix the global economy as demonstrators attacked a bank in an anti-capitalist riot in the British capital. Demonstrators laid siege to the Bank of England and smashed the windows of a nearby bank that has become a symbol of the financial crisis rescue carried out by the British government which will be discussed at Thursday’s Group of 20 summit in the city. Several thousand invaded the main financial district and tensions spilled over when protesters smashed their way into a major branch of Royal Bank of Scotland, which was state-owned last year. RAW STORY has more details here. This video is from ITN, broadcast Apr. 1, 2009.
protester: 'i have a responsibility to be here'

update1: man dies during g20 protests in london
from guardian: A man died last night during the G20 protests in central London as a day that began peacefully ended with police saying bottles were thrown at police medics trying to help him. The man had collapsed within a police cordon set up to contain the crowds who had assembled in central London and the City to protest over the G20 summit. There were 63 arrests on the day.

video: celente on the g20 riots: this is just the beginning

who controls the black bloc anarchists?
from paul joseph watson: The British authorities seemed to have little problem with allowing a group of violent black bloc anarchists to smash up the RBS building while provoking police yesterday, despite the group announcing their target in advance, yet a legitimate anti-poverty organization has had its “accreditation” to protest at the G20 removed on the orders of Downing Street... Apparently, if you wear black hoods and scarves, smash up private property and provoke police, then that’s absolutely fine and you’ll be left largely untouched. But God forbid if you’re a middle of the road anti-poverty group that just wants to peaceably march down the street. “An anti-poverty group expressed 'outrage' after its accreditation to attend Thursday’s G20 summit was suddenly withdrawn on Wednesday,” reports the Telegraph... Benedict Southworth, the group’s director, said that the decision was part of the government’s plan to “stage-manage events and prevent voices of dissent and disagreement being heard.” The black bloc anarchist assault on the Royal Bank of Scotland building yesterday certainly had an air of being stage-managed. The target was announced in advance, the authorities knew that the building was a prime target, and yet it was the only one in the street not boarded up. A cafe across the street was boarded up and yet the RBS building was left completely vulnerable to attack.

from guardian: At Coq D'Argent, the restaurant atop the distinctive salmon coloured building at Number One Poultry, adjacent to Bank underground station, the bankers appeared slightly drunk on the excitement of the protests down below; basking in the sunshine, ordering wine and necking oysters. Two traders based in an office opposite RBS on Bishopsgate said they had walked across the City "to have a nice lunch and chill out". Sipping coffee after three courses and a few Marlboro Lights, they were angry that the police didn't seem to be making any arrests: "Its kicking off over in Bishopsgate", they said. "The demonstrators are goading the police and hitting them with sticks, but they are just letting them. They aren't arresting anyone." And these two wanted to see the long arm of the law carting a few protesters away – because they had a financial interest in arrests. "I'll make money if they arrest more than 140", he said. Traders, he explained were putting spread bets on the number of arrests – with the quoted spread on Bloomberg at 130-140. They were also paying out on deaths and if more than 20 demonstrators are injured by horse charges. The riots, they said, were only a minor inconvenience: "We've been in this morning, made a lot of money and now are chilling out"... You couldn't quite forget what was happening though, the constant drone of helicopters competing with the increasingly noisy bankers.