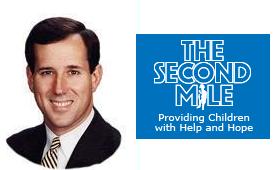 Wayne Madsen reveals his belief on a recent Alex Jones show (6:30 mark) that where there’s smoke “there’s fire there!” Madsen suggests a link between Santorum and Jerry Sandusky. The prolific journalist points to clusters of people with similar proclivities who may have connections. Madsen informs us that Santorum and Phil English started Penn St College Republicans in 1977, the same year Jerry Sandusky founded The Second Mile Charity. English was arrested in the 80’s for soliciting sex from a young black man, reports Madsen. The writer goes on to remind listeners that the local broadcaster who broke the Penn State scandal alleged that boys at Second Mile were being pimped out to wealthy clients. Madsen finally adds that at one point, Santorum gave Sandusky “an angel award” for his adoptions.

Is the hammer finally descending upon these creeps? It’s heartening to see flurry of activity on net such as at Gramercy Image News and ElusiveTruth.com. The latter has a checklist of attributes to confirm the likelihood of Madsen’s claims: Penn State alum – check. Republican congressman – check! You’ve got to love it and couldn’t be said better!

Phil English, a former Republican congressman with ties to Santorum and teenage male prostitutes [two arrests], received some colorful press in past here and here. The evidence seems at best circumstantial, but it raises suspicions and merits further attention. The present writer doesn’t believe Jerry Sandusky has just a personal problem, but suspects that he was recruited by others to compromise powerful people with the same degenerate needs – the same modus operandi used in politics! It’s all about control!