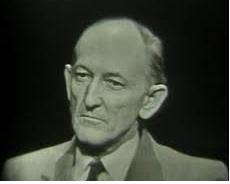 Major Donald Keyhoe, already an established writer, turned UFO researcher when editor Kevin Purdy of True magazine asked him to investigate early sightings in 1949. The Thomas F Mantell incident, a Kentucky Air National Guard pilot, who crashed to his death on January 7, 1948 in a Mustang P51 while in pursuit of a UFO, was among cases Keyhoe asked to examine. Mantell is assumed to have blacked out while in a steep climb. The observed UFO was reported from several vantage points: a control tower at Fort Knox, a Kentucky State Patrolman and observers at an Army air field in Ohio. The two surviving P51 pilots, also in pursuit, saw an object but called it later small and indistinct. The loss of life made UFO phenomena a much more serious issue after Mantell's reported death. The article written by Keyhoe sold well and expanded into the 1950 book (link to a freely available .pdf formatted version), "The Flying Saucers are Real," which sold over half a million copies.

Keyhoe followed with a subsequent book, Flying Saucers from Outer Space and involved in NICAP through fifties and sixties. A link to a 1958 Michael Wallace interview where Keyhoe discusses UFOs and contactees, also, the curious censorship of an earlier interview on Armstrong Circle Theater, which Keyhoe blamed on the Air Force. Is Keyhoe a disinfo agent? Keyhoe, a writer with military background, declared UFOs are from outer space. The present writer finds timeline of sightings that followed World War II closely, where Nazi UFO technology was possibly developed - an apparent continuity of interest!