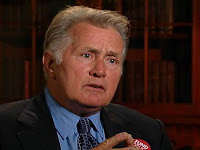 from paul joseph watson: Actor Martin Sheen questioned the official 9/11 story, as well as the collapse of Building 7 and Larry Silverstein's "pull it" comment during an anti-war march this past weekend in Los Angeles, saying that recent revelations about the attacks had caused him to have doubts.

Sheen was interviewed by We Are Change L.A. along with fellow actor Mark Ruffalo during an event hosted by the ANSWER Coalition at which around 20,000 people attended.

Emmy and Golden Globe Award-winning Martin Sheen, star of blockbuster films like Apocalypse Now and hit series The West Wing, follows in the footsteps of his son Charlie Sheen, who publicly spoke of his doubts about the official 9/11 story back in March 2006.

Martin Sheen said that he was dubious about questioning the official story until his son introduced him to new information about the anomalies of what happened on that day.