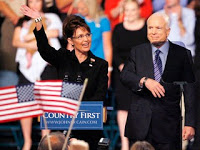 from wikinews: Alaska Governor Sarah Palin has been selected by United States Presidential candidate John McCain as his vice-presidential running-mate… News agencies began reporting Palin as the selection about an hour earlier, citing sources within the McCain campaign. In introducing Palin, McCain said, “I have found the right partner to stand up to those who value their privileges over their responsibilities.” Palin has an “outstanding reputation for standing up to special interests and entrenched bureaucracies,” he added. “I will be honored to serve next to the next president of the United States,” said Palin, accepting the position. “To have been chosen brings a great challenge. I know that it will demand the best I have to give, and I promise nothing less.”

palin under ethics investigation for abuse of power in alaska
from thinkprogress: In Dayton, OH today, Sen. John McCain (R-AZ) will announce that Alaska Gov. Sarah Palin will be his vice presidential running mate. Palin, who entered office in 2006 after running as a reformer, is touted by conservatives as being “a politician of eye-popping integrity.” But Palin’s reformer image took a hit last month when she was accused of attempting to get a state trooper fired. That state trooper was her former brother-in-law who had gone through “a messy divorce” with her sister. After the trooper’s boss wouldn’t act on the governor’s request, she fired him. Though Palin says she doesn’t “have anything to hide” and she “didn’t do anything wrong there,” an investigation has found that one of her aides pushed the firing… Palin’s scandal envelops her in the constellation of scandal-plagued lawmakers currently serving in Alaska.

lady & the gramp: the sinister diversion of the palin selection
from chris floyd: But while the Palin brouhaha provides a measure of comic relief, in the end it is just another ludicrous distraction from the main issue, the one issue that is never discussed openly in the campaign (except, as Arthur Silber notes below, inadvertently): the fact that both major parties and their candidates are co-conspirators in the most savage and extensive war crime of the 21st century: the invasion and occupation of Iraq.

from people’s voice: I applaud John McCain’s choice of Alaska Governor Sarah Palin as his vice president nominee. In many ways this choice was far more impressive than Barack Obama’s selection of Joe Biden. Better yet, the McCain selection will make the general election campaign far more interesting and competitive. I say this on the basis of looking at contradictions that the choices raised. Here we have Obama proclaiming endlessly that he was running against the politics of the past, but then he picks an extremely long term senator that is clearly a member of the status quo establishment. Moreover, Obama has kept boasting that he does not take money from lobbyists, but Biden has taken plenty. And then there is the claim of great judgment by Obama for his opposition to the Iraq war, but Biden played an important role as a Democrat in supporting the Bush war. Palin is a much, much better match with McCain.

One response to “mccain/palin ’08: and the crowd goes… huh?”