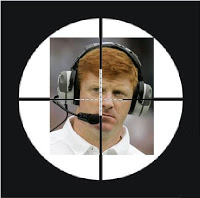 The Patriot-News article by Sara Ganim titled, "Another version of Mike McQueary's story about Jerry Sandusky surfaces," reveals who will be on receiving end of pot shots if her story is any indication? Ganim is given good reason however, as versions of McQueary's story keep growing! Sportswriter Mark Madden's question is key to entire case! "McQueary destroyed his own eyewitness account in such systematic fashion, you wonder if he did it on purpose. What would he possibly have to gain," asks Madden in November piece "Stupidity or Sabotage?" McQueary would gain relief from tremendous legal pressures. The assistant football coach would - in effect - clear not only former coach Sandusky but also fired ex-coach Joe Paterno of damning child abuse testimony, by rendering, his credibility invalid with so many versions.