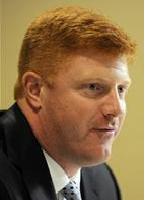 The outcome of the Penn State pedophile scandal will hinge on Assistant Coach Michael McQueary's testimony. Will McQueary do the right thing or is it too dangerous? A Pittsburgh Tribune-Review article, "Penn State's Mike McQueary goes from leader to outcast," provides grim foreshadowing of how scandal will likely pan out. McQueary, who spends much of his time now behind closed doors at home, will greatly influence any court decision when he takes the witness stand. According to the article, "McQueary is both star witness -- the only known witness capable of testifying in the child-sex case -- and polarizing figure for what he did or did not see and what he did or did not do. He has received multiple threats."

A Mark Madden article reports McQueary has provided three different versions of what he witnessed. "McQueary destroyed his own eyewitness account in such systematic fashion, you wonder if he did it on purpose. What would he possibly have to gain," asks Madden? McQueary's life may depend on it. If perpetrators had anything to do with 2005 disappearance of prosecutor Ray Gricar, the elimination of an assistant coach seems a smaller chore? McQueary may survive to live another day to pay with only death of his football career! It certainly seems in this case, it's too dangerous to do the right thing!