from propaganda matrix: The military-industrial complex is gearing up to ethnically cleanse the entire middle east in a genocidal purge that will be a curtain raiser for world war three as preparations for a nuclear air strike on Iran remain on stand-by absent only the monolithic staged terror attack or false-flag provocation that will justify them.

Armed Forces Journal, a mouthpiece for the military-industrial complex, recently carried a strategy plan for completely redrawing the borders of the Middle East written by retired Major Ralph Peters.

Peters lambastes the Neo-Cons for not having stamped enough influence (or chaos) on the middle east and calls for the use of genocide in realizing the Neo-Fascist's dream of a completely reinvented Middle East run by the same cabal currently responsible for untold war crimes In Iraq, Afghanistan and Lebanon.

"Oh, and one other dirty little secret from 5,000 years of history," writes Peters, "Ethnic cleansing works."

His twisted justification is that major crises around the globe are converging and that a massive economic crash is set to occur in 2008. Two of those converging disasters are listed as global warming and peak oil - which as we have exhaustively documented are monumental con jobs manufactured out of thin air to justify increased control over the personal lives of Westerners, feudalism, and expansion of empire.

An economic collapse doesn't worry the families that own the Federal Reserve and America because they will be the only ones to benefit from it.

Financial collapses are routinely preceded by insiders who are aware of the imminent downfall moving their assets and then buying them back for pennies on the dollar in the aftermath. So the graven necessity in which mass genocide is sold to us is inherently flawed and the justification for its implementation is a gargantuan deception.

Peters goes on to illustrate how our lives will be mired in a never ending cycle of war, terror and fear as he lays out the manifesto for world war three.

"There will be no peace. At any given moment for the rest of our lifetimes, there will be multiple conflicts in mutating forms around the globe. Violent conflict will dominate the headlines, but cultural and economic struggles will be steadier and ultimately more decisive. The de facto role of the US armed forces will be to keep the world safe for our economy and open to our cultural assault. To those ends, we will do a fair amount of killing." 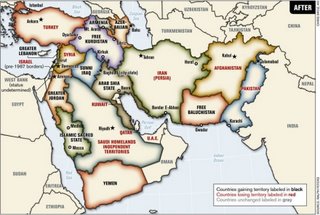 How the Middle East will look after it is ethnically cleansed by the "liberating" Neo-Fascist assault. Click to enlarge.

The endless drumbeat of propaganda tells us that it is Iran's Mahmoud Ahmadinejad who advocates genocide, yet scratch beneath the surface and the real protagonists of a vampiric holocaust to ethnically cleanse the middle east of Arabs are the US and Israeli Neo-Fascist crime syndicates that have hijacked our governments.

The megalomaniacs that control Israel wish to live in a world largely devoid of Muslims or Persians and they have embarked on a hundred year plus mission of ethnic cleansing to wipe them from the globe. The blitzkrieg of Lebanon is part of this process.

Race-specific bio-weapons have already been developed for this purpose. From Wired News,

"Israel is reportedly developing a biological weapon that would harm Arabs while leaving Jews unaffected, according to a report in London's Sunday Times."

"The report, citing Israeli military and western intelligence sources, says that scientists are trying to identify distinctive genes carried by Arabs to create a genetically modified bacterium or virus."

"The "ethno-bomb" program is based at Israel's Nes Tziyona research facility. Scientists are trying to use viruses and bacteria to alter DNA inside living cells and attack only those cells bearing Arabic genes."

Imagine if plans were unearthed detailing a program on behalf of Kim Jong-il or Mahmoud Ahmadinejad to create an ethno-bomb to wipe out Jews or caucasians. How would Israel and the United States react?

Only Israel is allowed to be nuclear-armed, violate dozens of UN treaties, use chemical weapons on civilians, and construct horrific policies of ethnic cleansing.

Israel have made a pact to carry out this agenda in league with the Neo-Cons, and above them the Globalists, whose desire is also world population reduction and complete full spectrum domination and control over all countries and near-Earth space itself.

All these facets are openly discussed by the elite in their own public documents.

Who wrote these words in their own strategy document? The Nazis? The regime of Pol Pot?

No, it was Paul Wolfowitz, William Kristol and the rest of the Neo-Fascist collaborators that formed the Project For a New American Century - the ideological framework of the Bush administration.

When we witness future atrocities that inflict death, misery and suffering on large numbers of the population will we recall who bragged about metering out such terror in the first place?

The Israeli bombardment of Lebanon is the next escalation of a conflict that is being orchestrated according to a set roadmap that leads directly to World War Three.

Israel, the United States and Great Britain have been caught red-handed on numerous occasions staging terror attacks and false flag provocations in the Middle East for over 50 years. 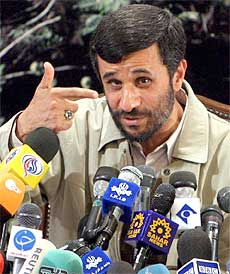 The next big provocation is intended to prod Iran into launching what will be presented by the world's media as a pre-emptive action, unjustified by any US or Israeli intervention and used as war propaganda to mandate nuclear air strikes to oust Ahmadinejad's regime.

Some see Ahmadinejad himself as just a cameo player in a rigged game. Greg Palast has suggested he could be reading off a script and has been in the pocket of the Neo-Fascists all along. Ahmadinejad and Bush are very close cousins in the context that they both believe their own ego and divine right to rule alone is enough to save them from the judgment of history. Contrast Ahmadinejad's behavior with that of Hugo Chavez - Chavez is completely obsessed with the fact that the US are trying to instigate regime change in Venezuela and he's shouting it from the rooftops in the media every week. Though the scheduled air strike of Iran is even more inevitable, Ahmadinejad remains seemingly unperturbed.

Others compare the actual context and meaning of Ahmadinejad's speeches with the bellicose hubris of warmongers who call him the new Hitler and say he wants to eradicate Israel.

Ahmadinejad never militarily threatened to "wipe Israel off the map," this is firstly a gross mistranslation and it is also taken completely out of context. Ahmadinejad called for the future end of the political system of Zionism, not to ethnically cleanse an entire country. In addition, earlier this week Ahmadinejad said on record that Iran "was no threat to Israel or any nation," but you won't hear Fox news repeating that particular quote every 5 minutes, because it doesn't correlate with the "Mad Mahmoud" image that the Neo-Fascists are trying to construct to justify their next act of bloodletting.

If there is some kind of staged attack in the US then as always we will look at who has the capability and the motive to pull it off - especially in light of the fact that Dick Cheney's USSTRATCOM contingency plan calls for attacking Iran in the immediate aftermath of a 'second 9/11' - no matter who is behind it - which of course is going to be the cabal Dick Cheney fronts for itself and the same pack of murderers that are actively seeking to initiate global ethic cleansing and genocide to bring about world war three.