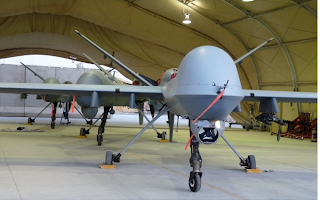 Danger Room provides updated stats for prevalence of drones in military use. Writer Noah Schachtman advises where is most of the action: "The real center of the U.S. drone campaign is in plain sight — on the hot and open battlefield of Afghanistan...The American military has launched 333 drone strikes this year in Afghanistan. That’s not only the highest total ever, according to U.S. Air Force statistics. It’s essentially the same number of robotic attacks in Pakistan since the CIA-led campaign there began nearly eight years ago." How many drones are in use? Schachtman provides current talley: "The military has 61 Predator and Reaper “combat air patrols,” each with three or four robotic planes. The CIA’s inventory is believed to be just a fraction of that: 30 to 35 drones total, although there is thought to be some overlap between the military and intelligence agency fleets. The Washington Post reported last month that the CIA is looking for another 10 drones as the unmanned aerial vehicles (UAVs) become more and more central to the agency’s worldwide counterterror campaign." How many drones does it take to win a war?