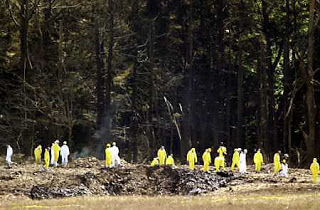 from paul joseph watson: A woman who claims she was stationed at Fort Meade on September 11, 2001, has given an explosive interview about how she personally heard military commanders make the decision to shoot down United Airlines Flight 93 on 9/11.

A person using the pseudonym Elizabeth Nelson told The Project Camelot website that she personally heard officials agree on the order to shoot down Flight 93. The decision was apparently made because the plane was flying in a no-fly zone near to Camp David and heading toward Site R, a military facility in known as the “backup Pentagon”.

Nelson stresses that at no time was there any talk of "hijackers," and the plane was shot down purely because communication had been lost and standard operating procedure mandated that the plane be intercepted and destroyed.

Because the woman refuses to provide her real name, the authenticity of her story is very much up for debate, but in a 40 minute MP3 recording [30.5mb MP3] of the interview, she relates what she witnessed in as sincere and genuine a way as one could expect. This individual has seemingly little to gain from making up such a story, unless it’s part of a deliberate disinformation campaign.