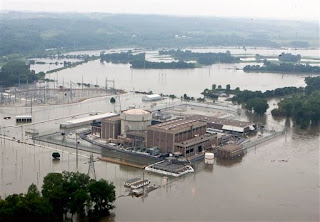 What in the world is going on? A Nebraska nuclear power plant in Fort Calhoun alongside the Missouri River evacuated recently and called in local fire department after a fire broke out. Arnie Gundersen, a nuclear power expert, provides professional insights into crisis and simple observation, "nuclear plants and sand bags don't mix." Gundersen implies a more serious crisis in a Five O'Clock Shadow interview with observation local fire departments are hardly ever called in as plants rountinely handle small fires. Also, the six dams along the Missouri river are full from greater snow run off this year and Gundersen bluntly adds a dam failure would present a great danger. The Ft Calhoun plant is also the storage facility for the state's spent fuel rods. Gundersen interview is available here.

There are, also, interesting posts elsewhere. A NC Renegade blog entry comments on No Fly Zone over the power plant. The present writer surmises, authorities want to conceal escaping gasses. Jeff Rense links an e-mail from Tom Burnett, an expert who is frequently on his show. Burnett points out, "Calhoun stores its spent fuel in ground-level pools which are underwater anyway - but they are open at the top. When the Missouri river pours in there, it's going to make Fukushima look like an x-ray. But that's not all. There are a LOT of nuclear plants on both the Missouri and Mississippi and they can all go to hell fast." Are you beginning to wonder why the crises at nuclear plants?