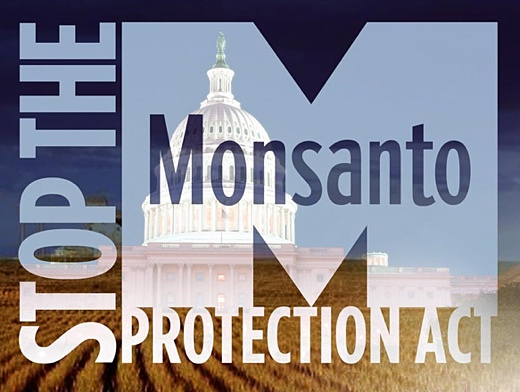 from RT.com: A budget provision protecting genetically-modified seeds from
litigation in the face of health risks was extended for three months in
an approved US House of Representatives’ spending bill on Tuesday
evening.

Called “The Monsanto Protection Act” by opponents, the
budget rider shields biotech behemoths like Monsanto, Cargill and
others from the threat of lawsuits and bars federal courts from
intervening to force an end to the sale of a GMO
(genetically-modified organism) even if the
genetically-engineered product causes damaging health effects.

The biotech rider first made news in March when it was a last-minute addition to the
successfully-passed House Agriculture Appropriations Bill for
2013, a short-term funding bill that was approved to avoid a
federal government shutdown.

The Center for Food Safety, a vocal opponent of the rider,
released a statement expressing dismay that the measure once
again avoided proper legislative process while usurping the power
to challenge GMO products in court.

“The rider represents an unprecedented attack on US judicial
review, which is an essential element of US law and provides a
critical check on government decisions that may negatively impact
human health, the environment or livelihoods,”  they
wrote. “This also raises potential jurisdictional concerns
with the Senate Agriculture and Judiciary Committees that merited
hearings by the Committees before its consideration.”

Following the original vote in March, President Barack Obama
signed the provision into law as part of
larger legislation to avoid a government shutdown. Rallies took place worldwide in May protesting the
clandestine effort to protect the powerful companies from
judicial scrutiny.

“It is extremely disappointing to see the damaging ‘Monsanto
Protection Act’ policy rider extended in the House spending
bill,” said Colin O’Neil, director of government affairs for
Center for Food Safety. “Hundreds of thousands of Americans
called their elected officials to voice their frustration and
disappointment over the inclusion of ‘Monsanto Protection Act’
this past spring. Its inclusion is a slap in the face to the
American public and our justice system.”

Largely as a result of prior lawsuits, the US Department of
Agriculture (USDA) is required to complete environmental impact
statements (EIS) to assess risk prior to both the planting and
sale of GMO crops. The extent and effectiveness to which the USDA
exercises this rule is in itself a source of serious dispute.

The reviews have been the focus of heated debate between food
safety advocacy groups and the biotech industry in the past. In
December of 2009, for example, Food Democracy Now collected
signatures during the EIS commenting period in a bid to prevent
the approval of Monsanto’s GMO alfalfa, which many feared would
contaminate organic feed used by dairy farmers; it was approved
regardless.

The biotech rider “could override any court-mandated caution
and could instead allow continued planting.  Further, it
forces USDA to approve permits for such continued planting
immediately, putting industry completely in charge by allowing
for a ‘back door approval’ mechanism,” the Center for Food
Safety said.