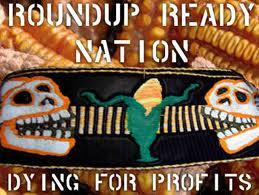 from naturalsociety.com: We already know the links between herbicides and sterility in men, birth defects, mental illness, obesity and possibly cancer—but now we have something new to add to the nasty effects of pesticides list — Parkinson’s disease and similar neurodegenerative conditions.

New research, published in the journal Neurotoxicology and Teratology, indicates a connection between a component in Monsanto’s Roundup and Parkinson’s disease. Glyphosate is said to induce cell death, with frightening repercussions. GreenMedInfo.com reports the study was investigating the links between herbicides (weed killers) and brain damage. These chemicals, the study’s authors say, “have been recognized as the main environmental factor associated with neurodegenerative disorders,” like Parkinson’s. Parkinson’s disease is a degenerative nervous system disease. It slowly progresses as time goes on with common symptoms like tremors, rigidity, difficulty walking, poor posture, lack of movement, and slowness of movement, according to the University of Maryland Medical Center.

The CDCreports Parkinson’s as the 14th leading cause of death in the U.S. In 2010 (the last year for which data is available), there was 4.6% increase in the number of deaths attributed to this disease. One has to wonder if there is a connection between this jump and the ever-growing prevalence of herbicides like Roundup in our air, food, and water. Studies indicate that glyphosate is toxic to human DNA “at concentrations diluted 450-fold lower than used in agricultural applications.” Worded differently—the levels considered safe by our government are 450 times the levels at which glyphosate has been found to damage and destroy human DNA. Yes, it’s that serious.

One case study found a woman who was exposed to glyphosate in the workplace for 3 years at a chemical factory. She wore gloves and a face mask. She was initially a healthy, middle-aged women. But, she developed “rigidity, slowness, and resting tremor in all four limbs.” She was also experiencing severe dizziness, weakness, and blurred vision. And hers isn’t the only such case. What’s so scary about the growing body of research on Monsanto’s Roundup, its components, and their presence in nearly everything around us, is that the federal government refuses to recognize the risk. Despite a growing concern on an international level, the powers-that-be are seemingly content to turn their eyes while the people demand accountability and safe food.