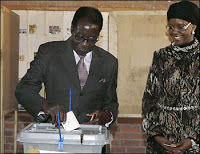 mugabe once again sworn in as president

from press tv: Robert Mugabe is once again sworn in as Zimbabwean president after being declared the landslide winner of the country's much-disputed election. The electoral commission said Mugabe won 85.51 percent of the vote compared to 43.2 percent in elections in March won by Tsvangirai with 47.9 percent - short of the absolute majority needed for a first round victory.

bush seeks new zimbabwe penalties
from cbs/ap: With Zimbabwe's runoff election over, the country politically divided and tens of thousands terrorized, the next question is how to deal with a newly empowered Robert Mugabe... Zimbabwe came under threat of further sanctions on Saturday as President Bush said the U.S. was working on new ways to punish Mugabe and his allies following the widely denounced presidential runoff election.

african union urged to reject sham zimbabwe election
from human rights watch: African states should impose sanctions against Robert Mugabe and his illegitimate government in Zimbabwe after the sham presidential runoff, Human Rights Watch said today. The situation in Zimbabwe, where government violence against opposition supporters continued even after the vote on June 27, 2008, will be on the agenda at the African Union summit in Sharm El Sheik, Egypt, on June 30 and July 1.

update: mugabe henchmen backed by barclays bank
from times online: Barclays is flouting European Union sanctions on Zimbabwe by providing two of President Robert Mugabe’s most senior henchmen with bank accounts. Both men are named on an EU blacklist that compels European-based financial institutions to freeze their bank accounts and have no dealings with them.